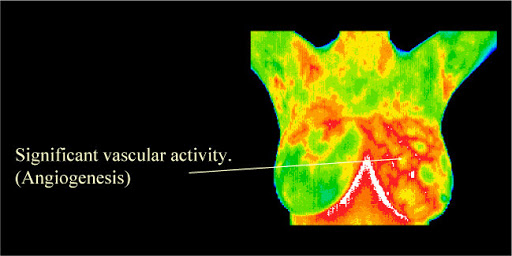 While the prognostic significance of tumor angiogenesis remains a topic of intense interest and study, a California radiologist is waging a

Certain types of vascular formations often precede the appearance of breast tumors on mammography, sometimes by more than a decade,

Specifically, he cited hypervascularity, enlarged or engorged arteries, and calcified arteries as vascular markers that he and colleagues at

the center have used to identify breast cancers smaller than 5 mm. Of these, the best marker is calcification in the artery, Gamagami said.

At the San Antonio Breast Cancer Symposium in December, Gamagami reported findings from a retrospective review of mammograms

made up to 13 years before breast cancer diagnosis. Among 204 patients, cancer- associated angiogenesis preceded more than 90% of

nonpalpable tumors and 100% of the palpable lesions.

gami and his colleagues will publish their first paper on the subject later this year in the Breast Journal. The radiologist has also begun

work on a text that will review evidence collected over the past 15 years.

By Gamagami's admission, the San Antonio presentation swayed few if any opinions. "If you don't have experience with something," he

said, "you don't know what questions to ask."

On the basis of laboratory and clinical observations, the Van Nuys group believes that mammographically detectable breast cancer angio-

ber and size, and then a malignant lesion forms its own nutrient and drainage vessels. Over the course of time, contiguous calcifications

that envelop the nutrient artery help distinguish the vessel from the drainage vein on mammography.

"Our work has demonstrated that these neovascular formations appear on mammography before the tumor is even visible," said Gama-

gami, although most physicians, he believes, overlook the formations or dismiss them as normal asymmetry. "What you don't know

about, you don't look for."

Neovascularity may have played a role in the rise and fall of thermography's potential as a breast cancer diagnostic tool. The California

nized signs of developing cancer. The investigators have begun a clinical evaluation of the feasibility of performing thermography-guided

"Thermography was eliminated from the diagnostic arsenal because the findings did not correlate with clinical findings, physical exami-

nation, and mammography," said Gamagami. "Everyone concluded that thermography had a high rate of false-positives. Now we know

the reason for those false-positive findings: angiogenesis."

Outside the Van Nuys clinic, other cancer specialists remain skeptical about the diagnostic potential of angiogenesis. San Antonio radi-

ologist Pam Otto, M.D., who saw the poster at the breast cancer symposium, questions the sensitivity and specificity of the approach.

"If you're talking about arterial circulation, that's microscopic and I think it will be very hard to see on mammography," said Otto, an as-

sistant professor of radiology at the University of Texas Health Science Center in San Antonio.

"To take out a [mammographically] busy breast and pick out a vascular pattern seems a little pie in the sky to me," said Stelling, head of

breast imaging at the University of Texas M. D. Anderson Cancer Center in Houston. "I'm not saying that it's not possible, but how we

position the breast and other factors can affect the view.

"Theoretically, we're looking at cellular changes and very small foci," Stelling continued. "For that to be reflected in a major change in an

artery at a very early time frame seems unlikely. In theory, it doesn't seem like it would be necessary for the blood supply to change with

the diagnostic potential of angiogenesis, but he would welcome such a development.

"If they have indeed found something, that would be neat because I don't know of anyone else who has done that," said Folk-

man, the Julia Dyckman Andrus Professor of Pediatric Surgery. "We keep a running literature search of the whole field [of an-

giogenesis], and I don't recall having seen anything on diagnosis."

He adds that the group will likely face a questioning, skeptical oncology community until the investigators have a large, pro-

"If they have only one abstract and no formal papers with statistical validation, I would suspect that the work will really be at-

tacked," he said. "That doesn't mean it's not true, but people tend to be really skeptical because there is such a big potential for

Gamagami and colleagues are no strangers to skepticism. "But before people decide this is right or wrong, I would just ask that

they look at what we have done and talk to someone who has been working in this area for 15 years," said Gamagami.

"Eighty percent of the breast cancer patients who come to us already have a palpable mass," he explained. "Only 20% have a